December 24, 2014
We wish all friends of the Little Lobitos a
merry Christmas and a happy New Year!

December 15, 2014
We've got new Lobito-Post from Little Lobito Joven, who can look forward to the cold season, now.

December 8, 2014
At yesterday's international exhibition in Wels/A the BOB was given to Little Lobito Gonzales. The judge was Timothy Finney from Ireland.

Congratulations to Tanja Noel and thanks for the photo!

December 1, 2014
Here is our photo of the month for December.

November 7, 2014
Our Bärbel (Little Lobito Barbarella) turns 13, today! Regarding the publicity, sweet Princess Alex outshines her sometimes a little bit, but instead, Bärbel exhibits a reasonable grandeur corres­ponding to her age ;-). She is the mother of two wonder­ful litters (F and I) and she also looks back on a very success­ful exhibition career. She is, for example, still the only Galgo bred by a German kennel, which ever was Best in Show at a Monográfica in Spain! Dear Bärbel, we wish all the best for you!

November 1, 2014
Here is our photo of the month for November.

October 26, 2014
This summer, we donated two water colours to the "Greyhound Safety Net art auction" in Australia. We've got post from there which shows us that it was a huge success: the two paintings yielded 450 AU$, which now will support retired racing greyhounds!

October 25, 2014
Little Lobito Gonzales got V1 and veteran BOB in the veteran class at the national exhibition as well as at the European Dogshow in Brno/CZ. He is now Europan veteran winner & Czech veteran champion.

Congratulations and thanks for the photo to Tanja Noel!

September 26, 2014
We put together some or our photos from the Galgo-JAS. Again, the Little Lobitos were very successful: those Galgos from our kennel, which were presented in the exhibition (Hormiga, Ingrid, Hada and Indigo), all got an "excellent". Hada was first in the champion class and, in addition, Indigo got the titles Jahressieger 2014 and "best male"! And finally, Little Lobito Hormiga, together with Jucaro Spi Bucanero, won the competition "couple class"! Congratulations to all of them!

September 17, 2014
We spent a very pleasant and interesting weekend in Cologne at the Special Show for the breed Galgo Español, and put together some impressions in our video:

September 1, 2014
Here is our photo of the month for September.

August 20, 2014
Our little Princess Alex has her own and very special ideas regarding her meals! To enjoy her food, there has to be at least one piece of extra goody on top of it. If this is missing, there will be a lot of protest:


August 18, 2014
We improved our Little Lobito Memory Game by, amongst other things, adding new photos which are randomly selected for each round.

You find the game at Links and more.

August 11, 2014
During the recent days, we started to completely rework our mobile website for smartphones and tablets. Usually, you should be automatically redirected to the mobile page when using a smartphone. Otherwise, just simply click on the item «mobile website» which is placed on the start page. And if you prefer the "normal" version of our website, e. g. on a tablet, you can switch by clicking on the menu item «desktop version».

August 3, 2014
We've got 2x new Lobito-Post: from Imelie & Huub, whom we visited recently in Norway, and from Little Lobito Espina, who turned 10 on August 1 together with her brothers and sisters from the E-Litter.

July 26, 2014
Together with our Galgos, we were in Sweden and also visiting Imelie & Huub in Norway. Here are some photos of our journey...

July 7, 2014
Is it true that another year passed by so fast? Our little Princess Alex I, the sweetest Galgo of the world, turns 14, today! Congratulations, sweetie! And we send, of course, a huge big Happy Birthday to her sister Azuela, as well!

June 20, 2014
Besides the videos of the Concurso and the Monográfica, we also brought some photos with us from France and Spain.

June 1, 2014
Our photo of the month for June comes again under the topic "camouflage"...

April 18, 2014
Here is the promised video of this year's Monográfica of the breed Galgo Español, which took place on April 6 in Sonseca:


April 15, 2014
We were in Sonseca, Spain, where this year's Monográfica of the breed Galgo Español took place one and a half weeks ago. The day before, there was a Concurso, which is an exhibition, where Galgos without FCI pedigrees may take part after registration. We made a video of this Concurso (the video of the Monográfica will follow within some days):

March 21, 2014
Right on the sixth birthday of our H-litter, we have got new Lobito-Post from Little Lobito Habanera. 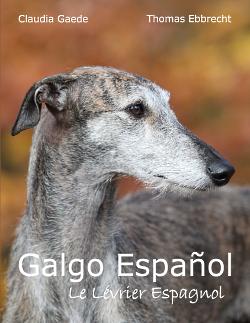 March 6, 2014
Our French Galgo book is ready now and can be ordered, for example, from Amazon. The book was translated from English by Jessie Ayuso, who is breeding Sloughis und Galgos under the kennel name «Del Sayad el Gazel» since 1988. Find more info about this and our other books at our website galgobuch.de.

February 1, 2014
Here is our photo of the month for February.

January 29, 2014
"An old flame never dies", as the saying goes. It seems that Bärbel is full of the joys of spring, already in January. See what Alex does...


January 2, 2014
In spite of the "competition" by Facebook, we received new Lobito-Post, which made us, of course, very happy!